2019 Regeneron Science Talent Search National Semifinalist, a program of the Society for Science and the Public

2015 Broadcom MASTERS National Semifinalist, a program of the Society for Science and the Public

2017 Youth in STEM and Girls in STEM Panelist at the World Science Festival, Brisbane, Australia

2016 Addressed the Florida Board of Governors

2019 Featured in "Stories for Kids who Dare to be Different; True Tales of Amazing People who Stood Up and Stood Out” by Ben Brooks

2018 Named Forbes 30 Under 30, Categories of Energy and Youngest

2018 Named one of Porter Magazine's Incredible Girls Changing the World

2016 WIRED Magazine article edited by President Obama, featured as one of six of the Nation's top innovations by students

2016 Named an Amy Poehler Smart Girl and a Mighty Girl 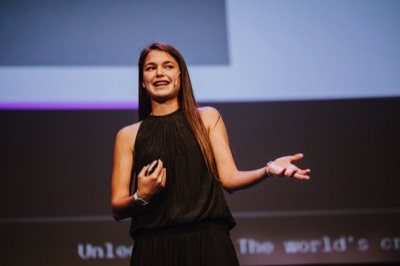